The Hoboken City Council has approved a plan to potentially proceed with construction on a remediation site that is currently facing scrutiny from neighboring residents for emitting noxious odors.

(This article has been updated with a statement from the City of Hoboken—SEE BELOW, AT THE END OF THE ARTICLE.)

According to JerseyDigs‘ Chris Fry:

“During their January 15 meeting, Hoboken’s city council approved a resolution related to a 1.43-acre parcel at 800-822 Monroe Street. The council’s move gave a company called Applied Monroe Lender LLC a conditional designation as redeveloper of the site, and the parties will now begin negotiating a deal to bring new life to the property.”

In its past life, the area was home to the Levolor-Lorentzen factory, which manufactured window blinds. In 1985, a massive fire burned that factory and a number of other structures in Hoboken to the ground. Solvents and acetone from the industrial activity on that lot has co-mingled with that underlying marshland, requiring extensive remediation. That remediation has been noticed by local residents around the property at 800 Monroe Street in Hoboken. A choking odor has prompted those residents and Hoboken media sites to make a stink of their own about it.

Our friends at HobokenGirl have been sounding the alarm on the issue for awhile. Their recent update on January 5 features an extensive account of exchanges between their team, the City of Hoboken, and Potomac-Hudson Engineering—a firm tasked with remediating the site.

According to the City of Hoboken, that project was originally slated for completion “by the end of 2018.” HobokenGirl has reported that Potomac-Hudson Engineering recently said, “The current owner of the property is remediating groundwater contamination that was caused by former industrial owners of the site and that has existed for many years prior to the new ownership. Active remediation on-site is expected to be completed by the end of the year (2019), with a demobilization of the system to follow in early 2020.”

All that fits in with the proposed timeline, which would make way for a proposed 10-story residential building with 186 units, each with corresponding parking, and 1900 square feet of commercial space.

Earlier this month hMAG went down to the site, where we saw a man walking down the middle of 8th Street into oncoming traffic. “Well I can’t walk over there,” he said, pointing to a large puddle outside the Monroe Center. “That’s human waste,” he casually claimed.

There have been ongoing reports of sewage and waste management issues in the vicinity of those buildings for extended periods of time. At one point, there was PVC piping transporting waste directly into a drain on the corner of 8th & Monroe. The site is located in the midst of numerous newly constructed residential complexes, as well as long-standing homes. It’s also one of the more flood-prone areas of Hoboken, situated on the western edge, at the base of the Palisades. 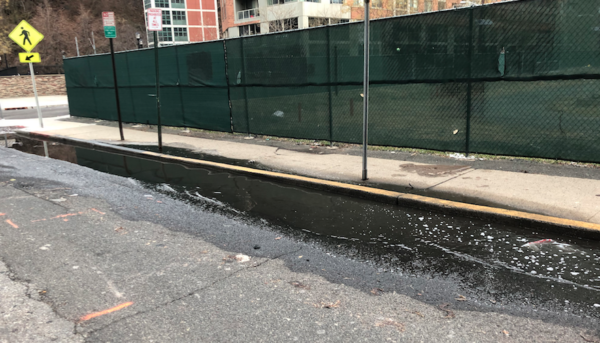 In September of 2019, hMAG had made several attempts to speak with developers of properties adjacent to 800 Monroe regarding the environmental and infrastructural impact of so many new residents in that area of town. Those organizations declined to comment.

In the meantime, HobokenGirl reports that the area is currently being treated with a neutralizer, to help with the odor. Residents are encouraged to contact the appropriate authorities should they encounter the strong, noxious odor.

They have instructed residents that each time the smell is reported, however, they treat it as a separate incident so the more residents call, the more attention will be in this area. So if you’re concerned, make sure to reach out — and continue to ask questions.

UPDATE—The City of Hoboken has made the following statement regarding the property at 800 Monroe:

“While a conditionally designated redeveloper has been authorized by the City Council, a final redevelopment agreement will be negotiated in the coming months that will provide specifications for the project including building height, parking, amenities, and more. A proposed agreement will take into account feedback from the public through community meetings that will be promoted by the City.”