Hoboken’s role in World War I can never be overstated. This Sunday, please join the Hoboken American Legion Post 107 and local dignitaries at the World War I Memorial in Elysian Park (1001 Hudson Street), as they commemorate the 11th hour of the 11th day of the 11th month—signifying the end of “the War to End All Wars.”

In the summer of 1914, nationalist fervor drove European nations into war. Although the United States did not engage until the spring of 1917, the conflict later known as World War I had an enormous impact on Hoboken, N.J., a small city with large immigrant communities and a busy port.

As early as July 1916, the war intruded on Hudson County with the explosion of a munitions depot on Black Tom Island, just off the coast of Jersey City. The explosion obliterated the island, shattering glass for miles around, yet the incident was initially downplayed, to avoid ramping up public support for America’s entry into World War I.

The United States declared war on Germany and her allies on April 6, 1917. Immediately, Hoboken’s German-owned shipping lines were seized, and the ships docked along the waterfront were commandeered to become troop transports. In a matter of weeks, the piers here in Hoboken were converted to serve as the chief port of embarkation for the American Expeditionary Force. General John J. “Black Jack” Pershing famously boasted that his troops would be in, “Heaven, Hell or Hoboken” by Christmas, 1917.

Sadly, Pershing’s promise turned out to be far too optimistic, and by the end of hostilities on November 11, 1918, nearly 2 million U.S. “Doughboys” would have passed through Hoboken, en route to the Western Front. Far fewer would return, as the AEF sustained 53,402 battle deaths, 63,114 non-combat deaths (including the devastating influenza pandemic of 1918) and 204,000 fighting men wounded. 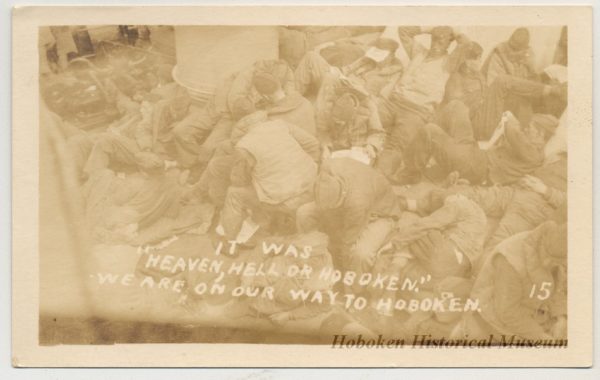 Pershing gave his troops three options. Hoboken was the most preferred. – image via HobokenMuseum.org.

Just prior to the war, Hoboken was one of the most German cities in New Jersey—with over 10,000 of its then 70,000+ residents being German-born. As hostilities commenced, German-born residents were required to register as “enemy aliens,” with many losing their jobs, homes, and businesses. Some were interned on Ellis Island during the war.

For the past few months, The Hoboken Historical Museum has been commemorating “The Great War,” with an ongoing exhibit “World War I Centennial, 1917-2017: Heaven, Hell or Hoboken.”

On Sunday, the Museum will host a production of acclaimed actor Douglas Taurel’s  An American Soldier’s Journey Home at the Hoboken Historical Museum on November 11th at 4 p.m. 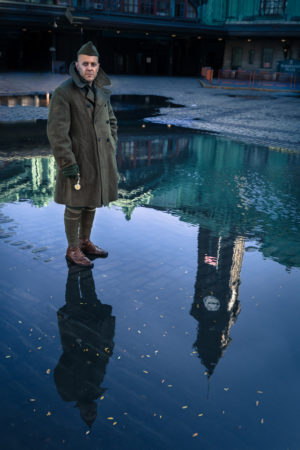 The play is based on the life of Irving Greenwald, a soldier from 308th Infantry Regiment during World War I, who was part of the Lost Battalion and whose diary is preserved by the Library of Congress Veterans History Project and is part of the Library’s exhibition, Echoes of the Great War: American Experiences of World War I.

Taurel’s one-man show weaves together archival images, music, and diary excerpts to narrate Greenwald’s entrance into the service and his experiences in France. Clad in period uniform and using a minimum of props, Taurel vividly conveys the intensity and terror of trench warfare, the jubilation of the troops following the Armistice, and Greenwald’s love for his family, particularly his wife, Leah.

Most of the 15 pieces in this exhibit have a World War I theme, in honor of the centennial anniversary of Armistice Day, the final day of “the War to End All Wars,” on November 11, 1918.

Despite all we were supposed to learn in history class, we still see a rise in nationalism across the globe. We see dangerous, long-running ethnic battles destabilizing entire regions—and we see the significant dangers of entangling alliances. One hundred years later, we face the same challenges and continue to fight adversaries that came about as a result of events in World War I.

Essentially, an entire century of U.S. foreign policy and military strategy was set into motion right here on the piers of Hoboken, over a century ago.

Something to think about, next time you’re out for peaceful a bike ride…

FRIDAYS ARE FOR FRANK: “A Foggy Day”

FRIDAYS ARE FOR FRANK: “I Cover The Waterfront” (Jeopardy! Edition)

FRIDAYS ARE FOR FRANK: “Come Fly With Me” — Continental Army Edition

FRIDAYS ARE FOR FRANK: “I Wish You Love” (feat. the Count Basie Orchestra)

FRIDAYS ARE FOR FRANK: “My Kind Of Town” (Jeopardy! Edition)