As Hurricane Florence is set to pummel North Carolina, abnormally high tides all the way up in Hoboken have local officials taking proactive measures to mitigate any impact from the storm’s aftermath.

Alarming pictures coming out of #HobokenTerminal this morning, as the 9:30 a.m. high tide made a mess of things—w/ numerous delays reported. In the past, @NJTRANSIT have described this flooding as “routine”… but it’s hard to accept that it’s “normal.”

From the City of Hoboken:

Please be advised that the National Hurricane Center is predicting heavy rain and wind as part of Hurricane Florence. Due to the likelihood of flooding, the Office of Emergency Management is taking precautions by putting no parking signs and barricades near flood prone intersections.

***Due to the potential for heavy winds, please remove all loose items from balconies, roof decks and front stoops.***

The City of Hoboken will provide more information as the situation develops. Thank you for your cooperation.

Timing for Hoboken’s potential impact is based on the storm’s reaction once it makes landfall in the Carolinas late Thursday/early Friday. Forecasters think Florence is likely to take a more southerly route than initially expected, hooking into South Carolina.

Along the North Carolina shore from Cape Fear to Cape Lookout, the storm surge could range from 9-13 feet—while Myrtle Beach, S.C. could see 6-9 feet of surge.

Back up here in Hoboken, the locations cited are among those that have routinely flooded during similar events in recent years. Although Hoboken will not face anything close to a direct storm surge as it did when Sandy hit the city dead-on in 2012, there may continue to be abnormally high tides along the Waterfront due to the amount of pressure Florence is putting on the Atlantic Ocean.

Furthermore, the Atlantic Storm season is seemingly ramping up a bit. So be proactive—take the time NOW to prepare for adverse weather conditions here in Hoboken. We’ve all seen the empty store shelves, price gouging on water and lines at the gas stations down South. You can avoid all of that anxiety by making a plan, stocking up on supplies and being ready for whatever Mother Nature may or may not have in store for us in the days/weeks/months to come. 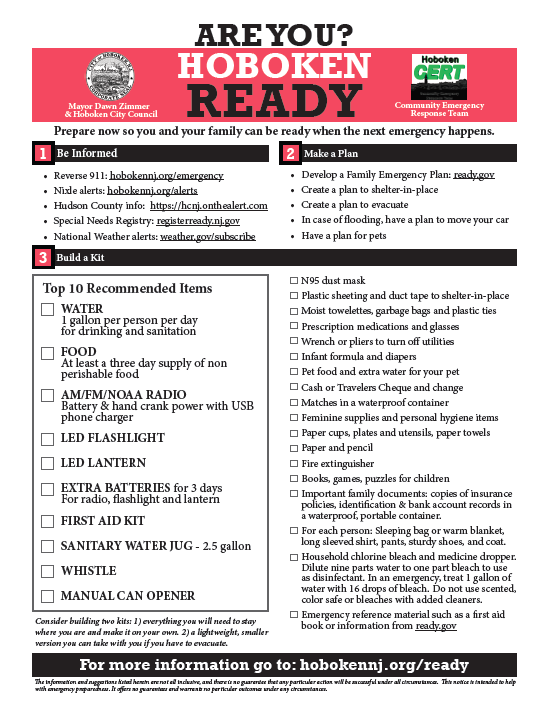 FRIDAYS ARE FOR FRANK: “Body and Soul”